Want to learn how to do the famous, classic New York accent? There are several features that make the New York City accent unique. One of the most key – yet hard-to-master – defining features is that the vowel “aw” can sometimes appear in unexpected places. In comparison to the Standard American Accent, New York accents are really heavy on the “aw” (and it’s not just because New Yorkers are so awesome!)

Places where the “aw” sound appears include: 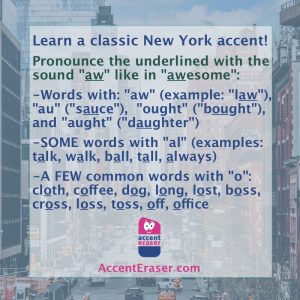 Want to perfect your New York accent? Contact me about accent training and dialect coaching!