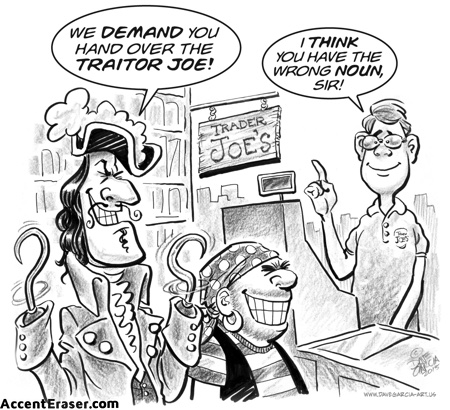 Maybe this is something you’ve wondered about too. Let me set your mind at ease and help you get your ‘t’s straight. (For a video version of this blog post click here.)

It would be nice if the letter “t” were always pronounced as in the word “tea”. Alas, there are actually 5 main “t” sounds in English.

This blog post at Slate does a fabulous and humorous job of summing up these differences, so it makes a good background before we start. In this article, we’ll delve a little deeper into these types of “t” sounds by looking at how and when to use each one.

How do you make the alveolar flap sound?

Touch the tip of your tongue lightly and quickly to the roof of your mouth just behind your top front teeth, making a light /d/ sound.

When is the letter “t” pronounced like an alveolar flap?

The alveolar flap appears in the following situations (unless it follows the rules detailed in #3b, below):

FUN FACT: The letter “t” is often pronounced with this alveolar flap (a quick “d” sound). That means that we have a lot of word pairs in English that sound exactly the same, even though one is spelled with “t” and one with “d”. For example, the following word pairs are pronounced the same even though they’re spelled differently:

How do you make the glottal stop sound?

You suddenly cut off your voice in the back of your throat, like the sound in the middle of “uh-oh”.

When is the letter “t” pronounced like a glottal stop?

How do you make the aspirated “t” sound?

Touch your tongue to the roof of your mouth just behind your top front teeth, make the /t/ sound, then immediately pull your tongue back and downward to release a puff of air.

Practice Tip: Say the “tuh” sound with your hand in front of your mouth. If you feel a burst of air on your hand the instant after you say it, you’re doing it right.

When is the letter “t” pronounced with the aspirated “t” sound?

How do you make the held “t” sound?

Touch your tongue to the roof of your mouth just behind your top front teeth, make the /t/ sound, then hold the tongue for an extra moment so that the puff of air is held in and not released.

When is the letter “t” pronounced with the held “t” sound?

It appears at the end of a word.

How do you make the /t/ sound?

Touch your tongue firmly to the roof of your mouth just behind your top front teeth, then pull it back, making a /t/ sound. There is neither a big nor a small release of air, and it does not resemble the “d” sound.

When is the letter “t” pronounced with the /t/ sound?

So these are the ways we pronounce the letter “t” in American English. These examples are just a small sample of each type, to get you starting to think about it.

Do you have more questions about American English, or are you interested in accent training? Reach out and contact me!